skip to main | skip to sidebar

I've just announced a Free Print Giveaway on my Facebook site of my new print Freefall, released this Sunday at 9PM GMT in my Shop.

Here's the link on how to be in the Competition

The Duke of Lancaster- aka the Black Duke Project Press

The Black Duke project is now starting to get increased attention with photographers and the media, here's a half page spread in the local paper the Evening Leader 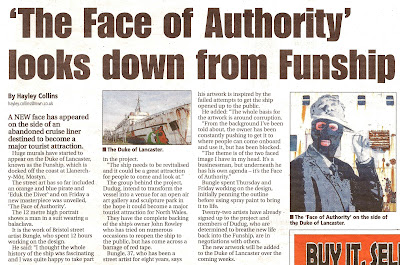 In early September I had a message from a project called DuDug. They asked me if I would be interested in helping them out with their project and if I’d be interested in painting a mural on a ship, not your everyday request! This is the picture they sent me. 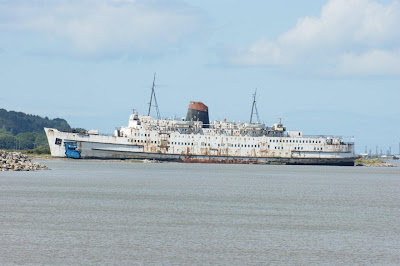 They sent some background info and so I did some digging for myself. It made for interesting reading.

In 1979 the owner of the Duke of Lancaster created "The Funship” it was ahead of its time and became a modern leisure complex with bars, hotel accommodation, conference suites, arcade machines, restaurants, shops etc, etc. It traded in this capacity very successfully for almost 6 years but as soon as the ship arrived the venture was suddenly attacked by the council and it ended up in the high court.

Every time the owners beat the council in court they changed tact and attacked them on something else. In the end they closed the doors in 1990 and locked the ship up. She’s a time capsule.

The aim of the project it to open up the Black Duke as an open-air Gallery. The aim is for the ship to be covered in unique pieces of art and open up the ship once again piece by piece, room by room to the general public. Artists have already started making their mark.

Kiwie has already done two pieces on the ship 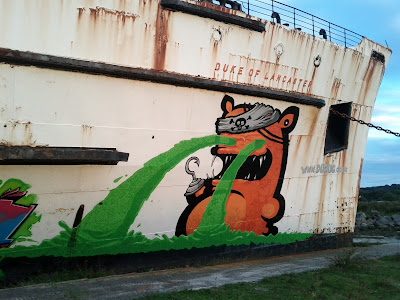 And so have the Cream Soda Crew 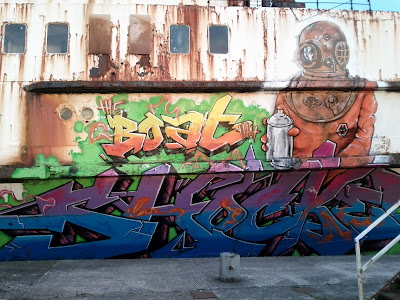 This gave me a new problem- how to paint a 12 meter high mural? quite a task for a stencil artist. I did the design of the piece and totted up the different colours involved- 8 which made it even less feasible to stencil.
The difficulty I could see would be keeping the scale and proportion of the image right so last Thursday 27th in the evening I got started. 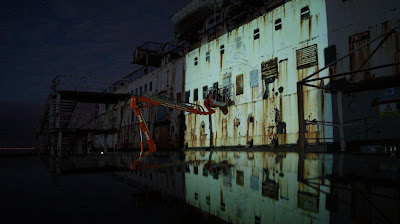 I used a projector to size the image on the ship and get the outline shape and proportions drawn up. This in itself was a tricky task, due to the cold and the damp the platform the projector was on kept moving down so the majority of the lines where out by a considerable amount. In the end I decided to draw the black areas the best I could and hand paint the rest of the image from the reference photographs I’d brought with me- essentially doing it by eye to match the picture.

I had to wait until daylight for this on the Friday and so pressed on as best I could. 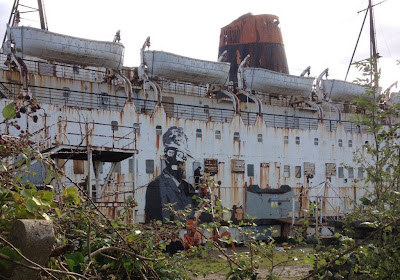 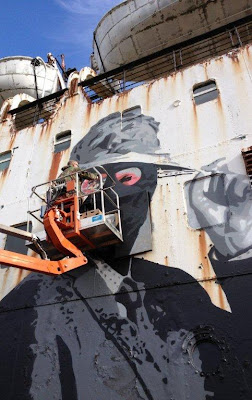 It was definitely a huge change from stencil painting but one which I thoroughly enjoyed. It was great to meet a group of people who are so passionate about not only the ship but the artwork too.

I hope with continued support from other artists and the public that the project is the success it deserves to be and I’ll continue to help where I can. Here's the final image. 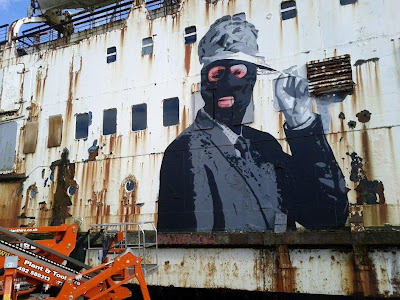 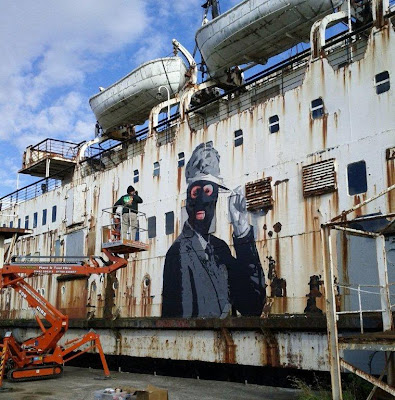 I had the pleasure of going to see the guys at Go Gallery in the heart of Amsterdam and am now happy to announce they have 3 hand painted editions on paper 50 x 70cm of only 10 available.

Here's the link to their site http://www.gogallery.nl/1295-2/ and the editions below.

Sounds like a great excuse to visit an amazing city! 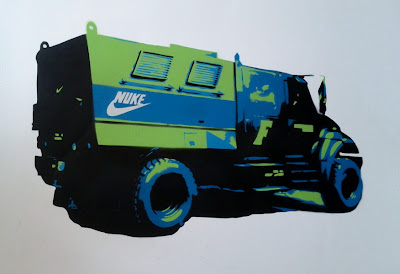 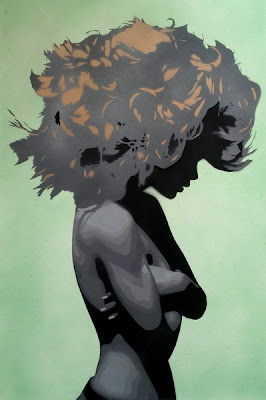 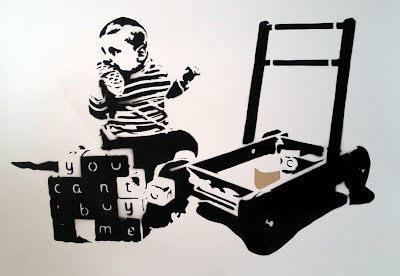 Cheers
PB
Posted by Unknown at 16:19 No comments:

I've just noticed I never posted the piece I did at Upfest back in June, oops. I'll get the hang of blogging one day, probably won't be a Monday tho.

Remember to register to the newsletter, there'll be one going out later this week and I'll be giving away something tasty on paper (it won't be fish n chips sorry) Thanks to the Upfest Gallery for hosting “Half Cut” Exhibition featuring myself, AP and Matti here in my hometown of Bristol.

The work went down a treat and was great fun getting a body of work together with two like minded stencil boys! The pictures are up on Flickr now, here’s the direct link to the site http://www.flickr.com/photos/bungleart/sets/72157631505614860/

I realise a Blog update is long overdue-

I never seem to find the time which is the worst excuse in the world, so here goes. Well I had a successful Upfest back at the beginning of June I had a great time on the Saturday, I painted next to Snik, Guy Denning and the Essex Rockerz so I was very happy to be alongside the “best of the best”. I painted this image at just over 2.5 metres wide probably the biggest and certainly the most detailed stencil to-date. I didn’t get to see some of the other guys painting so as usual had to look at snaps taken by the masses of keen photographers who were there. Props go out to MykGarton for an exceptional set of photos on his Flickr site.

I was also asked to paint an image of the Queen sat in the Upfest train- the most amazing live train paint job you’ve seen here's the timelapse video.

I’ve been asked to take some work to a gallery in Amsterdam (which I’ve now done) and I’ve been invited to a group show at the beginning of September. There’s also a new release scheduled for this month of one of my prints, commissioned through Epoch Gallery.

So there’s plenty to do I’ll upload some pictures and more links & details very soon and if you want to keep updated please don’t forget to register on the website. www.thebungle.co.uk  Cheers!

Great news the new Tarantino print is available now through RAT-KING Gallery in Japan. Here's the link Limited to only 15! 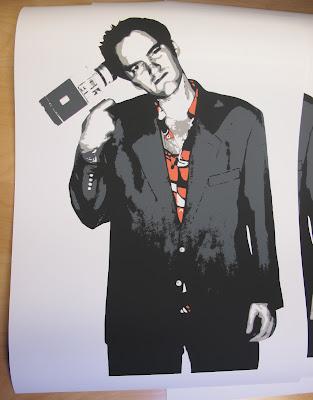 I've been commissioned to produce a Limited print run for a gallery in Japan. The prints are being finished off this week and once they're shipped I'll give you the website link and an email address to contact the gallery before the release date.. Watch this space for more info. The guys on the mailing list will be getting the heads up first so please register here
Posted by Unknown at 22:15 No comments:

A group exhibition showcasing the work of some of today’s best contemporary artists and celebrating figures that have inspired the gay community over the yearsTo tie in with LGBT History month, Graffik Gallery has commissioned some of today’s best emerging and established artists – gay and straight - to produce portraits of people who they believe have been an inspiration to the gay community.
I guess you'll want a preview... OK here goes. If you'd like to come along please pop me an email and I'll get you on the guest list for the night. For more info here's the Event Link
"Gaga-Gaze" preview 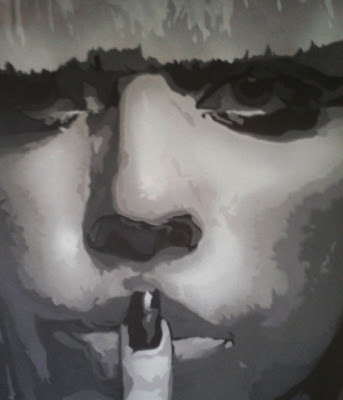 It never rains but it pours

Evening all, yet again I've forgotten how long it was since I updated this blog... a long time ago and for that all i can say is I've been a bit busy away from the laptop. No excuse but its the truth so here goes an attempt at an update over the next few days.


All went well at Mindshare, Tarantino and Hitchcock have gone down a storm so they've commissioned me to go back this year and paint 4 more walls so watch this space for updates. I'm painting 2 pieces in March and the others at a date TBC


In the meantime you can see the video of the days painting here:

A weekend at Mindshare HQ

Yesterday was a hectic days painting in London, I had a great time and will look to upload some photographs later in the week Mr Tarantino & Mr Hitchcock did me proud!
Posted by Unknown at 22:16 No comments:

For newsletter on releases, shows and special discounts 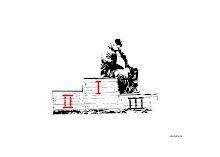 You can't buy me! Print 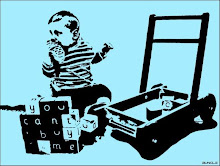 Gold Save the Queen Print